I know, I know… it’s been way too long since I wrote the last update. But here it is finally, covering everything that has happened between July and October:

A BEACH FULL OF TURTLES, AND EVEN FULLER OF PEOPLE

I don’t like to refer to those people as poachers, because poaching sounds like something really bad. And of course, those guys who take the nests from the beach are doing something bad – they are basically killing wildlife. But for most of them it is their only way to survive, the only source of income.
Familys here tend to have up to eight children. Mothers are busy with household chores while the men are trying to feed them all. But how do you manage to do that when there’s no work? We’re in a very remote place where cattle grazing, fishing and growing crops are the only opportunities. But not everyone has enough land, or a boat, to do so – and let’s just remember that these activities also create environmental problems.
So all they can do is take advantage of the natural resources that are readily available.
Of course the local families also eat some eggs themselves, but mostly they sell them to middlemen who then sell the eggs to the markets in the bigger cities. It’s a huge business.

One nest can be worth 20 US-Dollars. That’s a big amount of money in a country where people earn 10 Dollars for a whole day of hard work. So it’s quite tempting to go and look for turtle nests.

But here’s the thing: Competition is huge. Imagine a beach with 20 turtles in one night, but 50 people looking for them. Some of those guys are walking, some are cycling, others are riding their horses and the wealthier ones use their motorbikes. So this beach gets really busy at night – while during the day, it’s a lonesome paradise.
As soon as someone spots a turtle coming out of the water, he will RUN towards the animal to claim it his. It’s ridiculous.

Then you never know when and where the turtles are coming on shore… this beach is 12 kilometers long! One night has 12 hours! You must be lucky if you’re the one coming across a mama turtle that hasn’t been claimed yet by someone else.

This year, we bought our eggs from just one guy. Let’s call him the “Huevero” (egg collector), because he’s not a poacher. He’s not a bad person. He doesn’t want to harm the turtles, he just needs to make money.
Apart from our Huevero, Melvin has been looking for nests, too. But because he’s so busy during the day, he cannot spend the whole night on the beach. 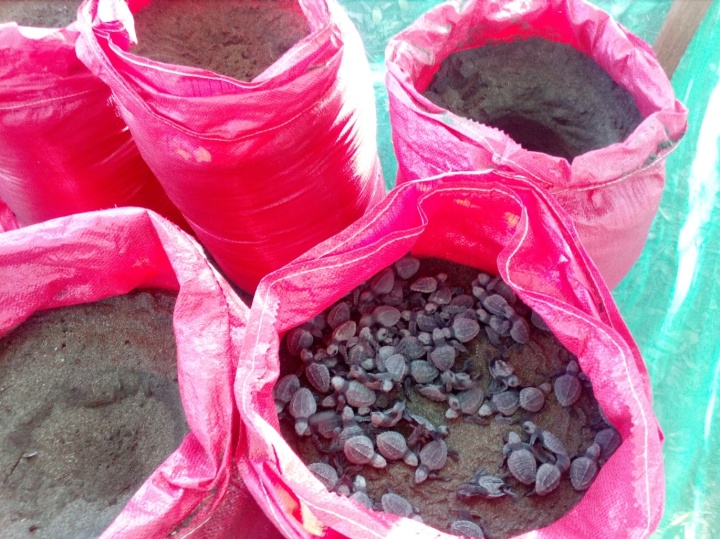 ready to be released!

So this is what we got: 20 Nests in three months. 2 Hawksbill nests, 18 Olive Ridley nests.
Doesn’t sound a lot, right?
Well, it’s really just about 1% of all nests that were laid on this beach.
That means next year, we will need to hire more Hueveros and, of course, take frequent night patrols ourselves. But next year, we can hopefully count on the help of our first volunteers, and that will make a huge difference!

What I basically want to say: There are lots of turtles on this beach! But it’s impossible to save them all on our own. Volunteers will therefore play a huge role for the success of our hatchery, and we hope to receive our first guests in 2020.

OUR HATCHERY IS A HUGE SUCCESS

This year, we set up a small hatchery near the house. The nests are not incubated in the ground, but in reused rice bags filled with sand from the beach. A lot of people have been sceptical about this, but on the other hand, there are quite a lot of turtle projects in Nicaragua that do it the same way.

We can now say for sure: Bag hatcheries do work!
We have our hatchery under a big tree who gives just the right amount of shade so that sand temperatures are between 26 and 30°C. That means we shouldn’t have a problem of creating way too many females, as it occurs in many other places around the world. In fact, we might create slightly more males.

nest was a great… 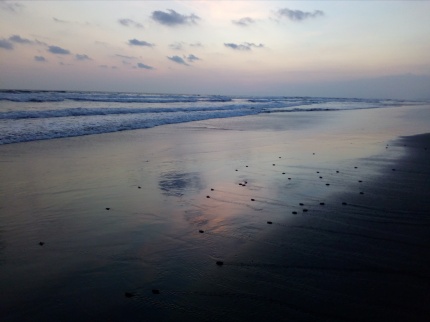 and off they go… 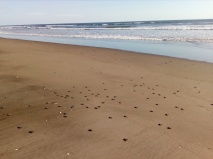 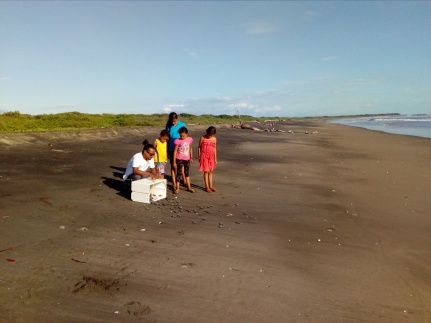 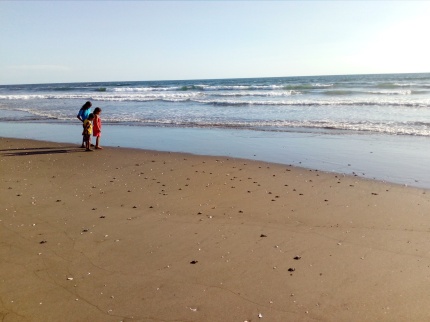 Next year we’ll build a bigger hatchery closer to the beach. Temperature control will play a big role as it defines the hatching success. But apart from that, it seems that the rice bags do a pretty good job, so we’re gonna stick to them 😉

WHERE HAS THE RAINY SEASON BEEN?

They say the north of Nicaragua is quite dry. But then they also say that this year was exceptionally dry, especially between June and late August when there was literally just one short thunderstorm every two weeks. That’s not our definition of a rainy season!
Fortunately, it picked up during September and October, with thunderstorms every other day. Very rarely, the rain wouldn’t cease during several hours and our little lagoon eventually filled up with a mix of ground- and rainwater. Yep, the groundwater level became so high that the lowest part of our property was flooded for about two weeks. But don’t worry – it’s really just a very small area where you can simply wade through.

and the sky looks amazing!

In good news: Our plants were finally able to thrive a bit, but the sandy soil still makes it tough for them. So again – we’ll need some dedicated volunteers who can take proper care of all the flowers, shrubs and trees we’ve planted!

We really hoped for more rain this year but we have to face the truth: Dry season ist starting again, and between December and April we won’t have a single drop of water coming from the sky. But I guess people will love the dry season, as everyone always wants to escape the rain, right? 😉

CONSTRUCTION IS DONE, WE’RE READY FOR THE PERMITS

Fiiiinnnnnalllllyyyyyyy we finished construction work! So let me proudly introduce you to our establishments, all of them which were built with dedication, time and **love**:

Rancho – this is our community space with a shared kitched, where people will meet, eat, drink, hang out, enjoy the shade and work on their personal projects. It’s surrounded by flowers and a dense forest. It’s the only place @ MEMANTA where volunteers will enjoy modern amenities, such as electricity and running water 😉

wanna step on some turtles? 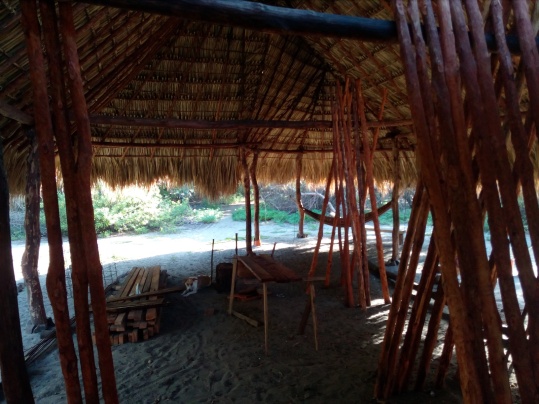 or just hang out in the shade?

Three Camping Huts – our first volunteers need to be adventurous at heart! We set up three huts with a space of 2,50 x 2,50 m each – enough to set up a tent for two persons. The huts are open to all sides but have an elevated floor and a roof which gives extra-protection. Again, you’ll see lots of greenery from here, and hear the waves crashing onto the shore.
We’ll provide tents, matresses and bed sheets – in case people don’t want to bring their own stuff.

only for the real…

Composting toilet – this is also called an “ecological dry toilet”. Everything that leaves your body will be used for composting. Yes, that’s right. Your shit will nurture our trees! Isn’t that awesome????
And while you’re sitting on the throne, you can have a look at the treetops outside and enjoy a fresh breeze coming through the windows. 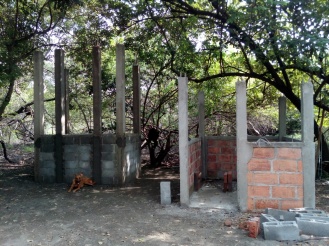 it was a long…

to build our beautiful…

Shower – our beautifully adorned shower works with buckets. Yes – you need to pull up buckets of water from the nearby well. It’s energy-saving, traditional and simply great for your daily workout! The water used for cleaning your body will then flow through a small biofilter and eventually water some plants in the backyard. Nothing goes to waste here!

I guess you can’t…

wait to take a nice… 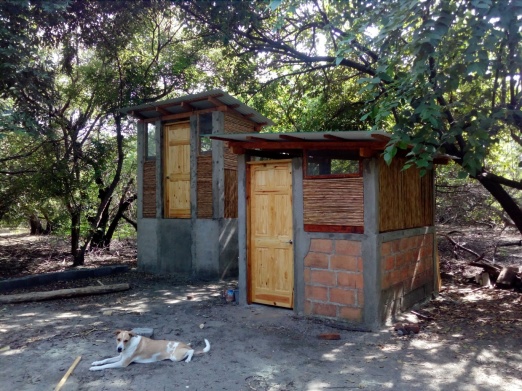 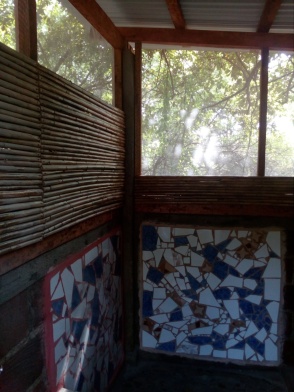 We still need to clean up a bit, decorate a bit, make everything a big nicer, and we’re ready for the permits! We’ll need one each from the tourism authority, the health authority, the police station and the fire department. Once we’ve got them all, we’re ready to open our doors!!!

Now I’ll let you enjoy some more photos, because they just didn’t fit in anywhere else. 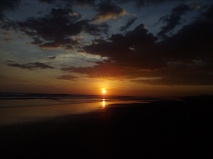 our cats are doing great 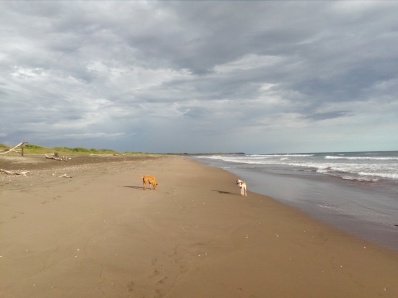 and our dogs are more than happy

View all posts by Daniela

WANT TO STAY FOR A FEW NIGHTS ONLY?

Book our cabin on airbnb
book OUR CAMPsite on airbnb

Nest donations help us cover our expenses. PLUS the pictures of the hatchlings will put a smile on your face!