Since our move to Venecia in December 2018, there has been a lot of stuff happening. We have been preparing for the construction of the project infrastructure, adapting to our new life in remoteness, planting a lot of trees, discovering some native animals during the dry season and saving our very first turtle nests. But just see for yourself!

Following the big move to our house, there was still a lot of work to be done. We planted a good amount of fruit trees, set up some small irrigation systems, further deepened our well, built an artisanal biofilter to treat our sewage water, improved the fence all around the property and found a nice spot up on the trees where there’s some good internet connection 😉

Melvin getting started on the biofilter 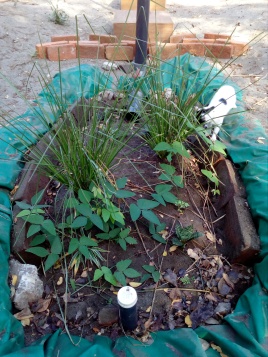 biofilter: up and running

just look how our plants grow! 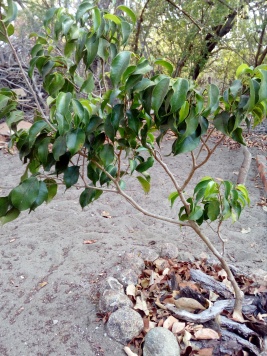 Also, we had to obtain some pretty important permits, brought our project design to perfection and gathered information about the availability of local and natural building materials such as wood, bamboo, palmtree leaves and sugarcane.
Up until January, we also walked the beach quite frequently to check for any turtle nesting activity. The nesting season had just been coming to an end, but we were still able to collect three nests in total that were laid very close to our property. Now, the turtles will not come back up until June / July, so we have some time to focus on the development of our project!

on the way from the beach to our house

Yes you heard it right: The first MEMANTA babies got already released into the ocean, just in front of our wonderful property! We built a very basic, small and provisional hatchery close to our house – more than 200 metres away from the ocean. That’s because we wanted to have full supervision and control of the daily and nightly happenings around the hatchery – just thinking about natural predators and other stuff. We located the nests in rice bags filled with sand from the beach. We also recorded the sand temperature during the time of incubation to make sure it wouldn’t get too hot or too cold. Around two months later, we had the very first hatchlings!
And it wasn’t just us two to witness that historical moment. At the time, we had a friend from Costa Rica over who was helping Melvin with some work around the property – he has been involved in a lot of sea turtle conservation projects in this home country and will hopefully come back once our hatchery is in full swing! 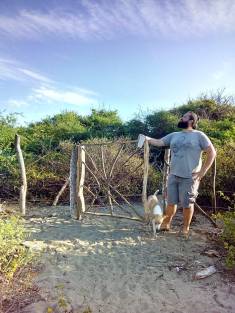 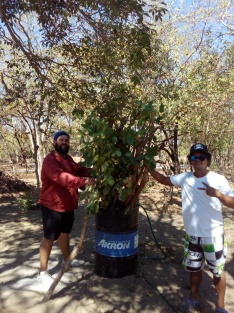 Melvin and Leo working on a “living fence”

Funnily enough, the hatchlings of our first two nests emerged during the day (which is quite uncommon) so we had the perfect opportunity to take pictures of the release! The last nest, however, hatched in the middle of the night and we let them go in a quiet and peaceful ceremony, watching some little dark shadows crawling towards the moon-lit ocean. 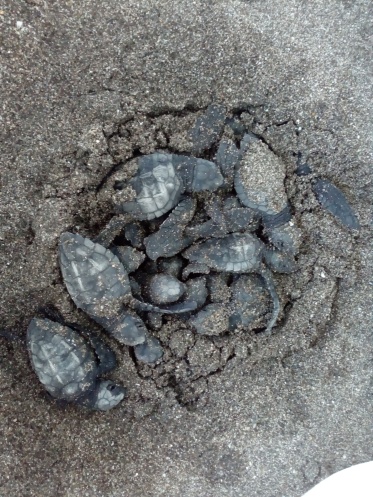 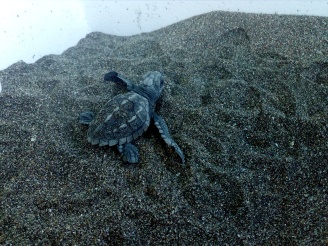 Congratulations to the FIRST MEMANTA BABY!

Once we’ll be officially open and receive our first volunteers, we are going to build a bigger, professional hatchery close to the beach! So make sure to not miss this important milestone!

There hasn’t been any rain since November and the natural landscape has gradually been drying up. Groundwater levels went down (that’s why we had to make our well deeper), leaves fell to the ground as certain tree species lost their greenery and some plants just magically disappeared. Our beachfront forest has been continuously changing and it’s just so interesting to discover everything for the very first time. Crabs, frogs and mosquitoes disappeared,  iguanas and ant eaters could be seen strolling around, some plants struggled while others were flourishing, tree branches broke off with high winds, the sea did its best to reshape the beach…. only the moon and the stars have been equally overwhelming every single night. 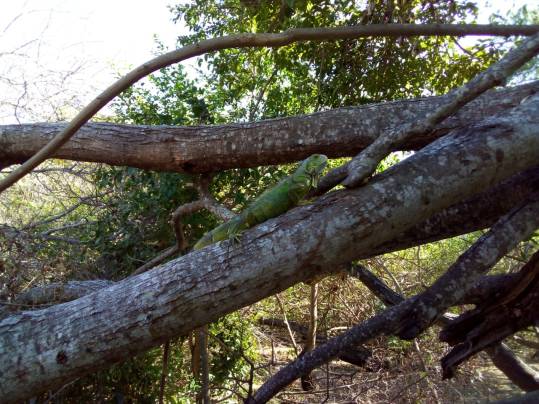 a rare but very friendly visitor

March and April are the hottest and driest months throughout the year, before the very first thunderstorms will make a powerful reappearance in May and June. Let’s see what the following months will bring for us, as we’re excited to see how nature is constantly evolving!

Yuma and one hell of a beach 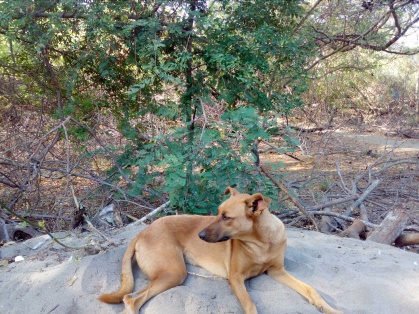 The centerpiece of MEMANTA will be the Rancho – a community space with a shared kitchen, dining and hang-out area. We cleared a big space from spiny, young and invasive vegetation (yupp, no real trees were harmed!) while we left the surroundings untouched – so the Rancho will hopefully give the feeling to be set in the middle of the jungle. The brick work for the kitchen was done by our trusted engineer who had already built our house. Attached to that, some local experts will soon put up an artisanal, traditional-style Rancho made of wood and palmtree leaves (these serve as roofing!). 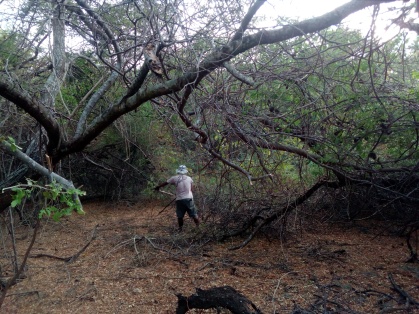 See below to witness the development of our lovely kitchen house! 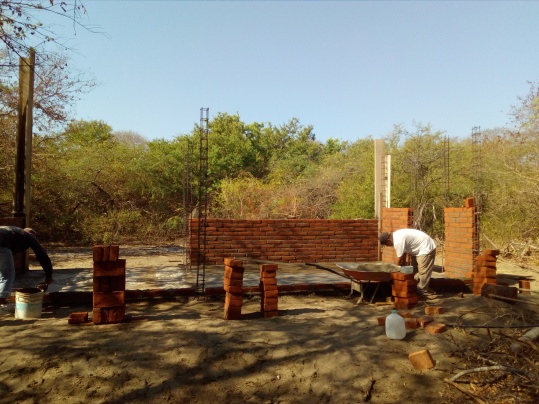 getting some artwork done 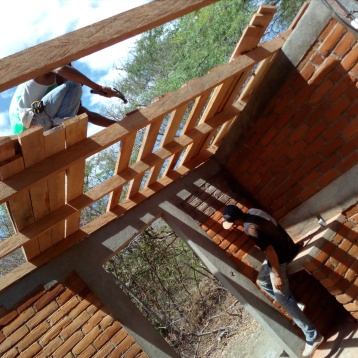 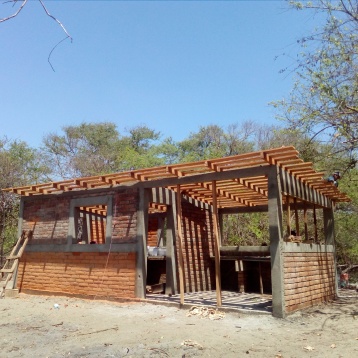 well hidden inside the forest

Regarding kitchen equipment, furniture, windows and greywater treatment, we will still need to get our hands dirty. Also, there’s a lot of room left for ornamental plants as well as useful trees and shrubs to be planted close to the Rancho. We just can’t get enough of the botanical possibilities here and want to make the most of the available space!

After finishing up the Rancho, we will keep working on the volunteer accommodation and – most importantly – the toilet and shower 😉 Check back in a few months’ time to see how far we got! 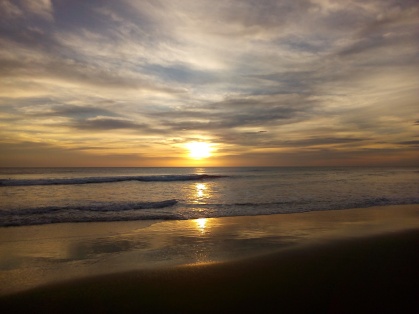 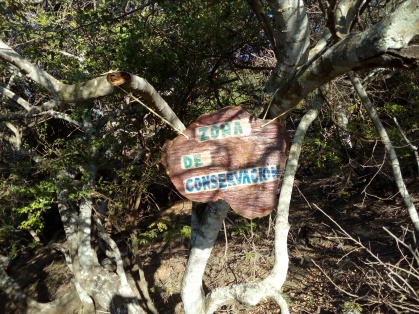 View all posts by Daniela

WANT TO STAY FOR A FEW NIGHTS ONLY?

Book our cabin on airbnb
book OUR CAMPsite on airbnb

Nest donations help us cover our expenses. PLUS the pictures of the hatchlings will put a smile on your face!